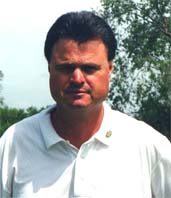 Rick Grayson, is a member of the PGA and the 2011 recipient of the PGA Junior Golf Leader Award, one of the PGA’s highest honors. He is currently the Teaching Professional at the Connie Morris Golf Learning Center, Rivercut Golf Course in Springfield, Missouri and has held this position for over 20 years. Rick was the first  PGA teaching professional in the state of Missouri to conduct two-day golf schools.

He appeared in GOLF Magazine’s video “How to Cure Your Slice” that was made up of the magazine’s Top 100 Golf Instructors in America. Rick has had numerous articles in GOLF Magazine and has written instructional articles for Golf in the Ozarks magazine and the Springfield News-Leader newspaper. He has appeared on The Golf Channel’s “Golf Academy Live”. Rick is the co-author of SuperGolf, a book about the game’s greatest players. The book was published by Harper Collins and is located in bookstores nationwide. He has also written “Inspire Junior Golf” and “A Masters Legacy, Horton Smith, Winner of the 1st and 3rd Masters”.   Golf Made Easy was Rick’s first video, which he produced in 1993. This video stresses the basic fundamentals in an easy-to-understand style that helps golfers of all ages. He also wrote and produced “Ozarks–Footprints in the Fairway” a documentary about the history of golf in the Ozarks for Ozarks Public Television.

Rick has had great success with junior golfers. He has worked with numerous juniors who have received golf scholarships and taught over ten Missouri high school state champions as well as players on the Korn Ferry Tour  Rick has studied under great teachers like Bob Toski, Jim Flick and Davis Love. He has attended seminars and learned helpful information from teachers like David Leadbetter and Hank Haney as well as numerous others. He has given lessons to a wide variety of people from state amateur champions to Nike tour players, and from Andy Williams to Alice Cooper.

He is a card carrying member of the Elvis fan club and has a lifetime love of everything Golf.